A while back, a friend of mine took a physiology course. She started having trouble because rote memorization isn't really her thing. We spent a long time talking about how to make it easier for her to get the information from the course to stick in her head.

Initially, she was trying to memorize information in the form of a block of text, like this:

"Food processing begins with ingestion. The teeth aid in mechanical digestion by masticating food. Mastication permits easier deglutition and faster chemical breakdown in the digestive tract. During mastication, salivary glands secrete saliva to soften the food into a bolus. Saliva contains the salivary amylase enzyme, which digests carbohydrates, and mucus, which softens food into a bolus. Ingestion starts both chemical and mechanical digestion." Adam.com

You can memorize that word-for-word, but you haven't really learned anything. First, we tried rewriting several paragraphs (like the one above) into a visual list: 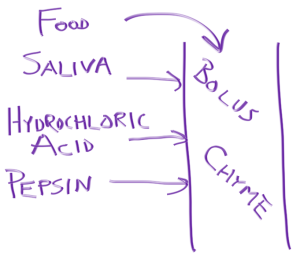 A visual list is less daunting than a paragraph of text, but it's also lost a bunch of information. So then we tried a flowchart: 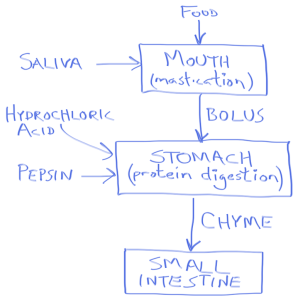 Why is the flowchart easier to remember than the visual list?  Context. You have additional context of location and processes (the boxes), progression between the boxes (the down-arrows and labels), and ingredients added at each step. Human memory does much better with context.

Human memory also does much better with visuals than abstractions. A flowchart is pretty abstract. But we're on a whiteboard... we don't need to be constrained by the limitations of a flowchart! Why not make this a true visual memory tool?

And that's exactly what we did:

We ended up with a silly picture... but one that you couldn't get out of your head even if you tried. We've used color to differentiate elements of the drawing: red for organs, blue for ingredients, green for processes, and black for our overall context, our hungry balding model.

Since then, my friend has always drawn a rough sketch when trying to memorize something. She recently graduated as a Physician's Assistant and is now practicing.

Draw more! It's good for your brain.