If you’ve ever spent any time trying to draw something that looks good on a computer, you realize pretty quickly that using a mouse isn't fun. It's been described as “painting with a bar of soap”. It’s very hard, if not impossible, to draw well that way. 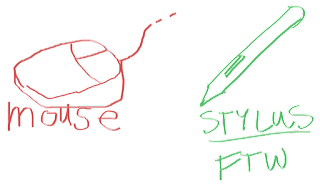 And don’t even get me started on drawing with a laptop trackpad. Painful.

One of the reasons Limnu exists is because we (like the rest of the world) realized that tablets like iPad are pretty darn amazing. Just like with a pencil, you draw right where your hand is. There’s no weird spatial abstraction like a mouse getting in the way.

The problem is, other than some finger painting in kindergarten, we didn’t learn to draw or write with our fingers. We held a brush or a pen or something.

Steve Jobs (in)famously said: “Who wants a stylus? You have to get ‘em, put ‘em away; you lose ‘em. Yuck. Nobody wants a stylus, so let’s not use a stylus.”

I own a bunch of Apple products. The laptop I’m writing this blog on, for example. But as brilliant as Steve Jobs was, I have to disagree with his opinion about styluses. When it comes to drawing, I love using a stylus on my iPad and my Android tablet.

The Limnu team spends a lot of our time getting Limnu to be the best it can be on a whole pile of devices (desktops, laptops, tablets, even tablets without screens!) and input devices (trackpads, mice, fingers on screens, styluses on screens).

And we’ll keep doing that, because we want you to be able to use your favorite tools.

But if you’re unhappy with your drawing, give a stylus a try. I was pretty hesitant at first, but a stylus has become my favorite way to use Limnu, as well as every other non-typing app on all my touch devices.